Lula’s presidential election victory in Brazil has the potential to re-set EU-Latin American relations through ratification of the EU-Mercosul agreement. Yet, writes Johanne Døhlie Saltnes, there remain competing European and Brazilian demands that must be balanced

On 30 October 2022, Luiz Inácio 'Lula' da Silva won the second round of the presidential elections in Brazil. Heads of state worldwide welcomed the news, after a four-year Brazilian international cold front. Lula has made a commitment to reduce deforestation in the Amazon to zero. However, the EU remains loath to ratify a free trade agreement with the South American trade bloc Mercosul (also known as Mercosur) that comprises Brazil, Argentina, Uruguay, and Paraguay. Deforestation rates remain the most important factor behind its reluctance.

Observers have hailed Lula’s victory as a landmark moment. ‘Brazil is back!’ claimed Lula at the recent COP27 in Sharm El-Sheikh. Western leaders cheered him like he was a rockstar. EU policymakers, Directorate-General (DG) trade first and foremost, now eye an opportunity to gain political support in Europe to ratify the agreement.

An EU-Mercosul free trade deal could be a first step to building a closer relationship with the Latin American region. The EU needs to seek closer political ties with ‘old friends’ and like-minded states. Russia’s war on Ukraine and Xi Jinping’s expansive foreign policy have made this abundantly clear. Political change in Brazil presents a timely opportunity for the EU. Yet, many challenges remain.

Locking in the commitment to reduce deforestation

Back in 2019, following 20 years of negotiations, the EU and Mercosul had reached an agreement. The EU and its member states, however, remained hesitant to ratify it. They cited widespread forest fires in the Amazon during summer 2019, and skyrocketing deforestation during Bolsonaro’s presidential term.

Bolsonaro himself was keen to ratify the EU agreement. He wanted better access for Brazilian exports (principally beef) to the European market. But he also strongly denounced EU leaders' critiques of the 2019 Amazon fires as illegitimate colonial intervention.

Managing deforestation is a longstanding issue in Brazilian politics. Brazil had developed strong environmental agencies and laws protecting its forests and the people living in them. Bolsonaro systematically dismantled them. Yet, in Brazil, the debate about environmental hazards and deforestation remains largely an internal issue. Brazilian politicians emphasise sovereignty over the Amazon, and they are critical of intervention or trade conditions set by foreign actors.

For the EU, however, locking in sustainability safeguards is the only way member states will green-light the EU-Mercosul agreement, which would increase substantially the export of Brazilian products to the EU. The irony is that importing Brazilian beef could incentivise Brazilian agribusiness to clear forest for pastureland, and grow soy.

To avoid negative environmental consequences of trade, The EU-Mercosul agreement contains a chapter on sustainability. However, given the recent increase in Amazon deforestation, critics and EU member states point out that it is limited in scope and that its enforcement mechanism is too weak to guarantee that the EU’s trade policy will not contribute to increasing deforestation.

Meanwhile, DG Trade has been developing an ‘additional instrument’ to join the agreement. Its exact content and formulations remain a well-kept secret of policymakers. However, sources explain that it will contain references to the parties’ National Determined Contributions as defined by the Paris Climate Agreement. It will be reciprocal, and will not create any additional obligations.

Getting the agreement ratified is difficult because it must strike a balance between pleasing European requests for increased environmental safeguards and avoiding the inclusion of elements that would not be acceptable to Mercosul.

A case in point is the possibility of introducing a sanctions mechanism in the additional instrument, for which the EP has been calling, to give the agreement more bite. A sanctions mechanism, however, will be a difficult sell to Mercosul countries, which emphasise respect for equal sovereignty between states.

Another option the EU is considering is separating the free trade agreement from the political agreement. This would make it easier to get the trade part ratified because it would only have to be presented to the Council and the EP. Thus, it would avoid having to be ratified in the parliaments of the 27 EU member states. However, this solution might also run into significant criticism from the member states and civil society organisations, because the political commitment to sustainable trade would be left dangling.

As part of its green deal, the EU is in the process of agreeing two new initiatives: regulation of deforestation-free products and the directive on corporate sustainability due diligence. These aim to ensure that products consumed in the EU are deforestation free.

Together, the new initiatives seek to minimise the EU’s contribution to deforestation worldwide by ensuring that imported products come from deforestation-free supply chains. Yet, at the same time, these new autonomous instruments have generated criticism from Mercosul countries.

Brazil (compared with, say, Uruguay) has a long way to go before establishing systems that trace their exports’ value chains. Thus, the trade gains that Mercosul achieved in the agreement might give them less value for money when the EU adopts its autonomous tools, because the European market will prevent some goods from entering.

Lula's victory creates a window of opportunity for EU-Mercosul relations. Yet, there is a bumpy road ahead towards ratification. To strike a balance between pleasing European and Brazilian sceptics, the EU will have to rely on its incoming Swedish and Spanish trade-friendly Council presidencies.

Her work has appeared in Journal of Common Market Studies, Cooperation and Conflict, Politics and Governance, Third World Quarterly, Journal of European Integration and Global Affairs.

She is a founding editor of The Loop.

Johanne also is the author of The European Union and Global Development: A Rights-Based Development Policy? 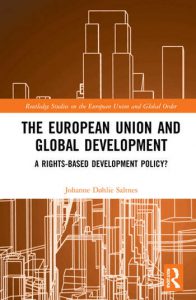